I decided to go with figs for letter F. This is a fruit that has a surah it the Qur’an named after it. We also often have figs for snack at home. Has to be a good choice, or so I thought.

The recipe we made was from Stacey Snacks. It was super easy for us to follow and it turned out great Alhamdulillah. Here are our steps following Stacey’s recipe. 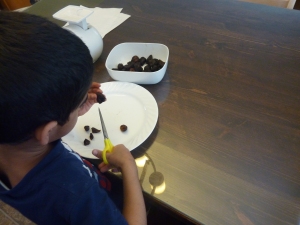 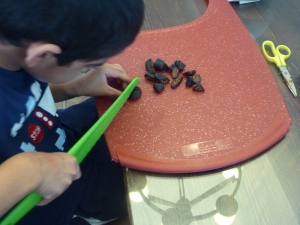 After much whining about sticky fingers, we switched to plastic knife

The only thing I did not follow was using dried rosemary instead of fresh ones. Not a good idea. The smell and flavour of rosemary was infused in the cake. However there were the awful grass like snippets of dried rosemary when you bit into the cake. Not a nice thing.

Fig cake made from olive oil

Half of this cake dissapeared soon after it came out of the oven. It tastes great when eaten warm. The other half . . . well lets say the children were not interested in a fig cake the next day. They rather eat figs as they are.

Sadly DS2 did not enjoy making this recipe. I think he wanted something much more exciting that dried figs. My intentions were to teach him about a fruit mentioned in the Qur’an. However I do realize that the alphabet is what we are attempting here and it has to be fun for DS2.

Anyhow, this recipe is a keeper and I think it will make a great enrichment activity when learning Surah At-Teen, figs and olive (oil) in one cake.

Posted by Umm Sayang on April 23, 2011 in AlphaFood Venture

3 responses to “F for Figs”