The next few post will be the continuation of our AlphaFood Venture that we had completed before Ramadhan. Just that I did not have the time to write the post.

Letter Q was a tough one to pick a child friendly recipe for. I decided on quail eggs as I have had them back home and they were cute that I knew the would be a hit.

We started of by viewing some pictures of quail online and doing a coloring page we found here.

Then I boiled the eggs. The idea was to create a nest using fried vermicelli noodles and then placing the tiny eggs on them.

As the were boiling, there was this strong eggy smell that filled the kitchen.

Once the were boiled we examined the colour and size of the quail egg in comparison to a regular chicken egg. 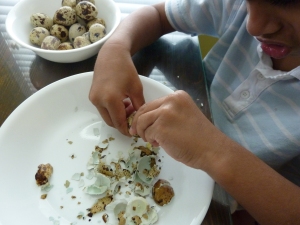 Then Ilyaas (4) and I peeled off the shells. By this point I was sure this was not how quail eggs were supposed to smell like even though it has been ages since I had one. Ilyaas and I were grossed out! (Check out his nose twitch in the picture LoL!). Thank goodness for the garburator.

That night a quick phone call to my dear sister-in-law Nor, hearing my description she chimed, “Dah rosak lah tu!” Translated, IT IS ROTTEN.

We plan and Allah plans better. So much for my quail egg nest 😦

Posted by Umm Sayang on September 7, 2011 in AlphaFood Venture, Cooking/Baking